Laputa - the Castle in the Sky

Okay, I'm still ploughing through the piece that I'm going to post over at the cinema blog. Whilst I haven't been paying much attention, I suspect that I get a different crowd there and here. I get so few comments there, it's hard to know. So I'll just quickly fill you in on this music and the flick that inspired it.

The composer is a fellow called Hisaishi Jo. He does all the soundtracks for the animation flicks of Miyazaki Hayao (Spirited Away) and Takahata Isao (Only Yesterday) as well as the existentialist gangster flicks of Beat Takeshi (Hana-Bi). Call me old fashioned but I like music that fills me with emotion. If it can make me cry it gets the brass ring. I'm talking about Puccini with Madame Butterfly, Sakamoto Ryuichi with The Last Emperor, and Hisaishi Jo with just about anything. I'm a big fan. 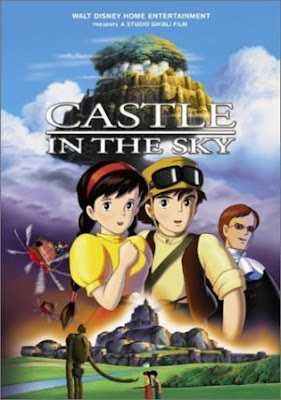 This piece here is the main theme for The Castle In The Sky (Tenku No Shiru Laputa). And yep, it's an animated kid's film. But it's a kid's film like Brideshead Revisited is a soap opera. To dismiss it by the genre doesn't really do it justice. And to describe this film is easier said than done. That's why I'm taking so long at the cinema blog, ha ha. 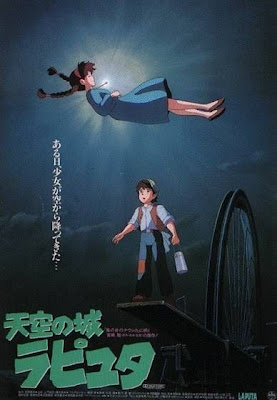 First up, Castle In The Sky is full of floating and flight. But it's not so much inspired by flying as it is by the dreams one has of it, if you can dig it. We've all flown, I expect. Was it like your dream of flying? Exactly. Miyazaki has obviously pondered the difference and put it into his films. 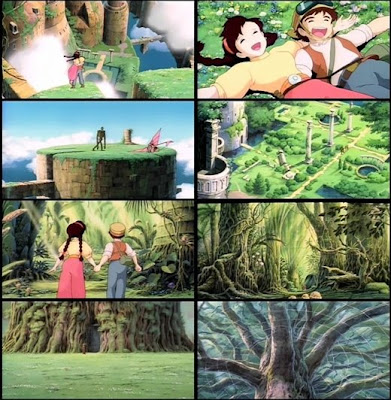 It's also about a triumph of nature over human ambition. This is another common theme in Miyazaki movies. The piece of music I posted here most fully kicks into prominence in the scene where our hero and heroine walk through the eden-like wonderland of the lost Laputa. We are treated to long joyful walk through an idyll populated by birds, butterflies and curious aquatic creatures. Miyazaki rarely misses a chance to put birdlife in his movies. He has nothing if not an eye for nature. And it's a particularly reverent eye. Miyazaki is confirmed Shintoist. If you wondered what Shinto is, believe it or not you already know. It that's confusing, you need merely watch Miyazaki. 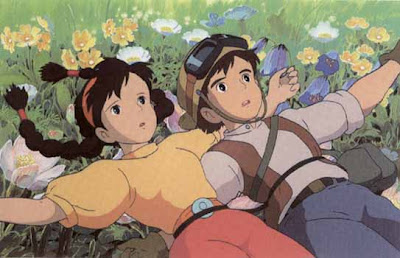 The other constant theme of Miyazaki's flicks is that of the transient nature of things. All of his films involve loss. Here paradise is found and then lost again. And this is as it should be. Nothing can be held onto forever. Indeed even when our two first discover Laputa we know that it cannot last. And we know this thanks to Hisaishi Jo's marvellous soundtrack which is simultaneously happy, triumphant, melancholy, and wistful. 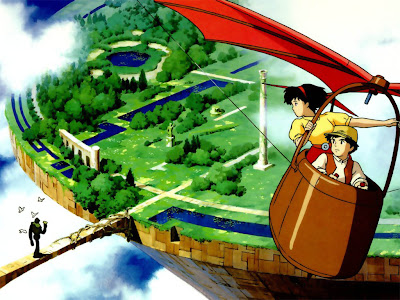 But really the can't-quite-put-your-finger-on-it complex variety of emotions that Miyazaki and Hisaishi convey with their marvellous collaborations is beyond my prose. Frankly I thought the haiku did a far better job.

So thanks folks. I'll be honest and say that this was something of a self-indulgent experiment. But I thought it was worth it by way of a change. And you never know, something may occur to me again, and I'll break up the routine then. It's not just me, you know. If you have some bright idea, do tell. No promises, but I'm always up for it. Yoroshiku.

It's so very still,
everyone sleeping but me,
waiting for the rain

Hey anon, will you forgive me? I didn't put you on the front page. It's just that there was something about 'emotional roller coaster' that, er, gee whiz, I don't know... I just didn't groove on it (smiley winky exasperated face). But pile in on Rousseau and see how you go. Yoroshiku.

That's OK nobody as you know I have a few faces here - not that I try very hard with any of them it just suits not to mix them
And as un-groovable as it was it was what I first felt as I listened to your ditty
My second was to the percussion instrument/s used - electronic clapsticks was it??

hi-- sure--thanks for asking. only please download it and credit where you found it instead of hotlinking, okay?

great idea for a group.

quite interesting article. I would love to follow you on twitter. By the way, did you know that some chinese hacker had hacked twitter yesterday again.

very useful article. I would love to follow you on twitter. By the way, did you know that some chinese hacker had busted twitter yesterday again. 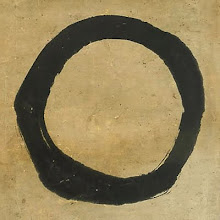